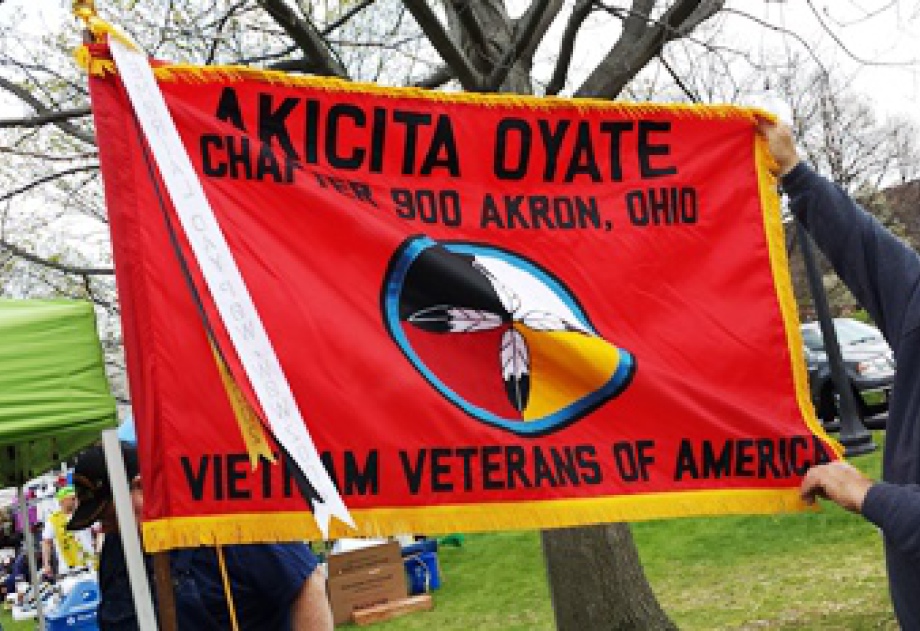 Watson Park was part of a project started in 1972 in which trees were to have been planted throughout the county – one for every serviceman killed in the war.  But the project was never completed.  Trees died.  Interest waned.  Markers were misplaced.  Watson Park was a grassy traffic island in Goodyear Heights marked only by street signs – Malasia Road, Wingfoot and Watson Street.  It sat idle and forgotten until 1986 when Charlie Maerean decided to bring it to life.  Charlie served in 1971-1972, with a tour in Vietnam with the Army 84th Combat Engineers. There were plaques and markers made for the 19 Vietnam Veterans from Goodyear Heights who lost their lives in the war, but they were never utilized. Charlie found some in city warehouses and a few at the corners of the park, long uncared for and forgotten. He has made it his personal mission to complete the park and care for it.  Since that time Charlie has always maintained the park, setting the markers, planting flowers and shrubs and being a caretaker of the property.  Below is an overhead of the park property. 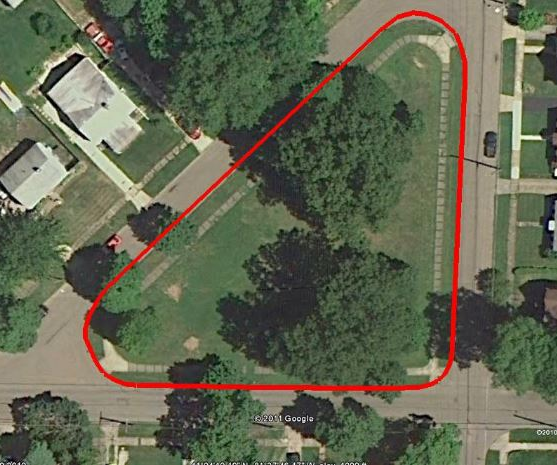 Time passed and A few years ago an Boy Scout  (Joe Rebuck) selected the park for his Eagle Scout Project.  He constructed 3 wooden benches and installed a flagpole in the park.  More time passed and The Chapter got wind of the park.  The Goodyear Heights R.I.G.H.T. Group was having a meeting concerning the park. We decided to attend this meeting and this is where we met Charlie. He pulled in the parking lot and crawled out of a Jeep (containing a very large dog in the back) wearing a NAM ball cap on. It went downhill from there. (In a very good way!)

Since that meeting,  The Chapter decided to make the park a project to complete.  We  decided the first thing to do would be to place a memorial stone at the base of the flag pole and go from there.  Below are some of the pix: 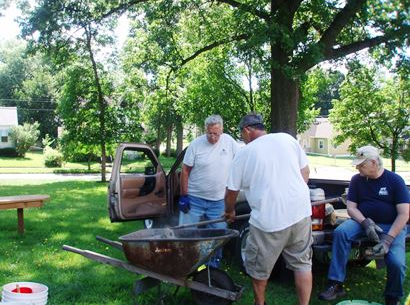 Charlie mixing, I (Lee) am learning as our in resident commissioner (Bruce) supervises!! 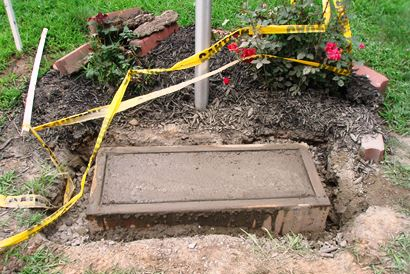 The footer is ready for the stone!!

THE SECOND PHASE: OBTAIN AND PLACE THE STONE IN PLACE.

We obtained the stone from Dailey Monument and it was delivered by Bob Dailey, the company owner.  When the stone was set, a miniature Purple Heart Meadow and sage from South Dakota was placed beneath.  Pix are below: 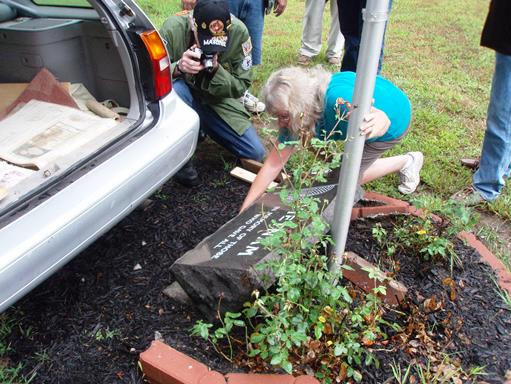 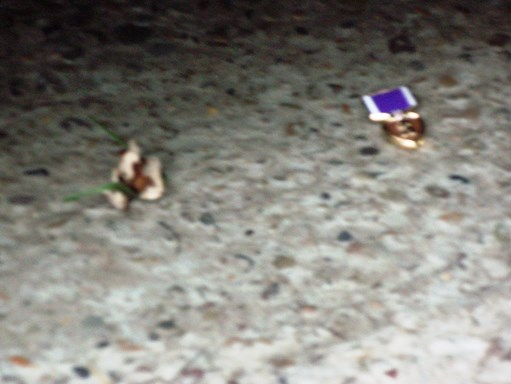 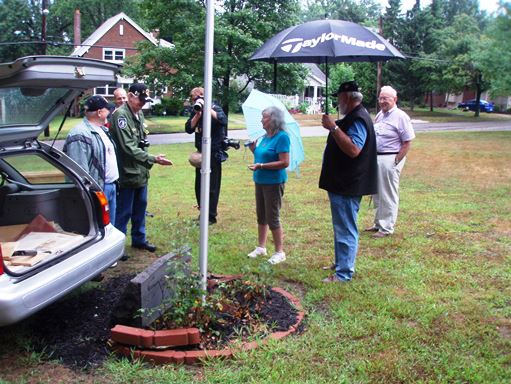 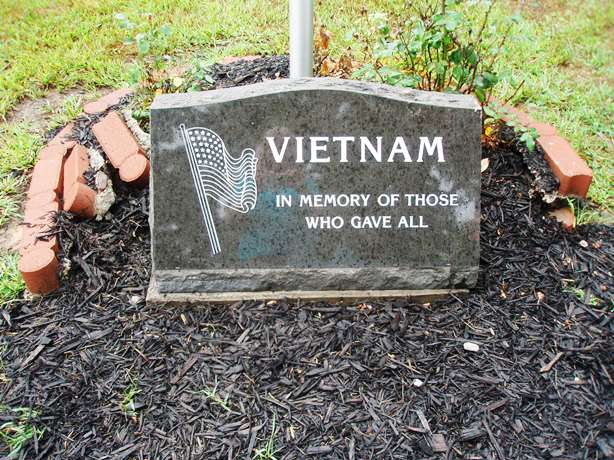 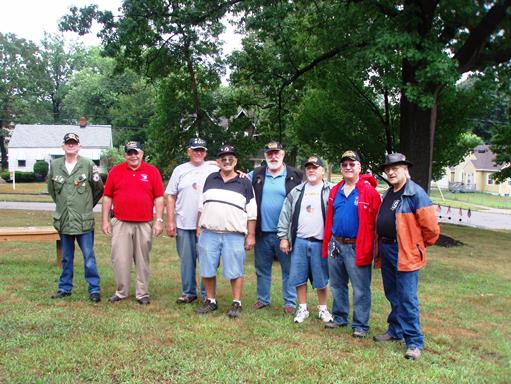 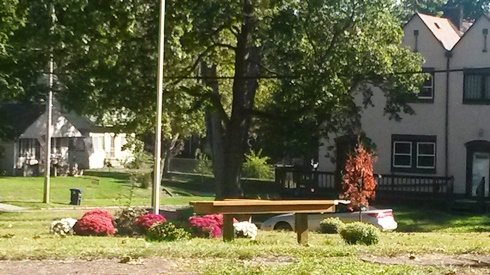 Charlie and his wife came up a few days later and planted mums around it.

THE THIRD PHASE, SETTTING THE BRICKS:

The Goodyear Heights R.I.G.H.T group had the names engraved on the bricks and the Akron City Park Employees installed them.  We found about it after the fact.  Since the bricks were laid in a random manner, we decided to reorganize them in alphabetical order and add trim around to dress it up. 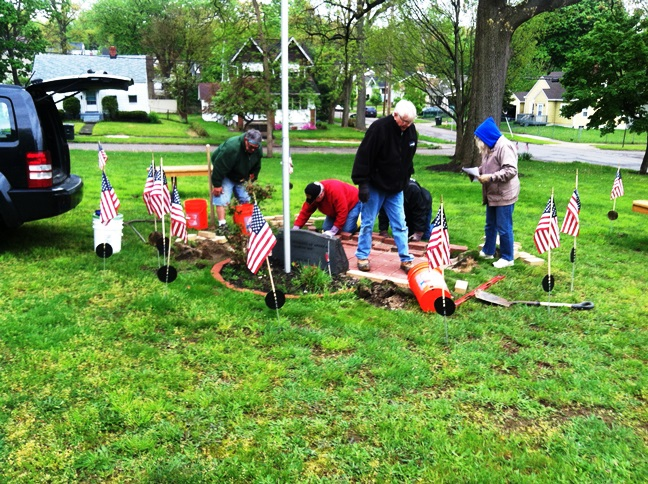 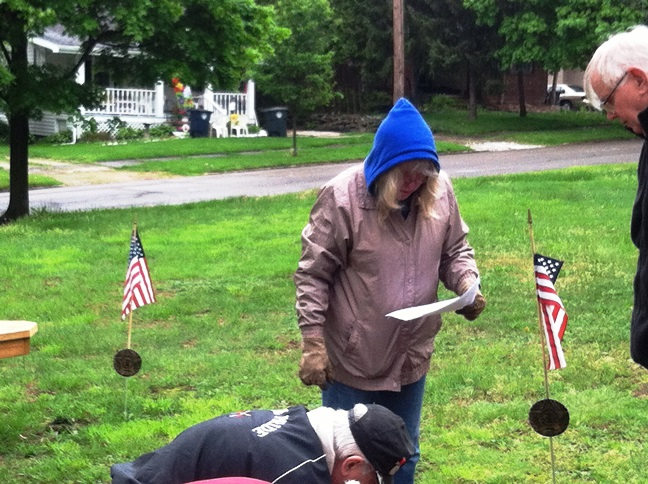 No it’s not a garden gnome, it’s just Patty reading the names! 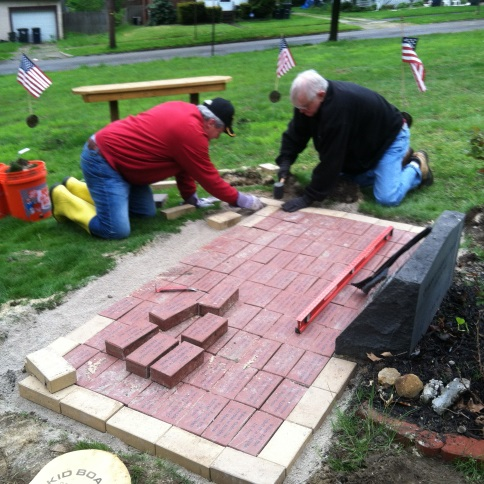 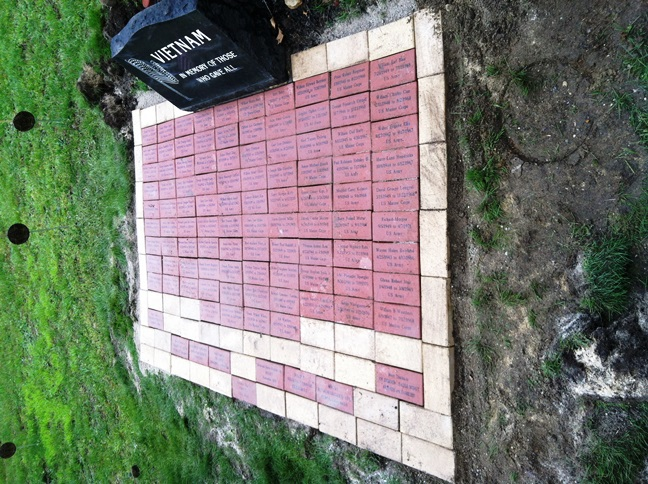 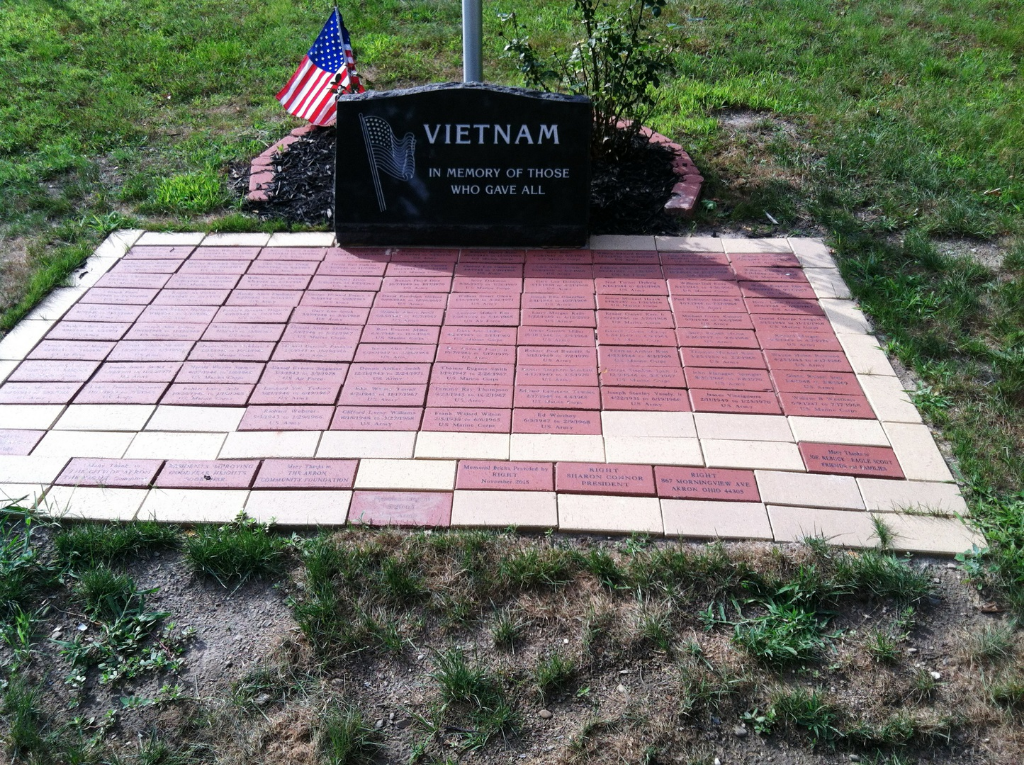 The final result, all Bricks placed in proper order and proper areas.

Next came the planting of Hosta greenery around the monument area.  The Hosta plants were donated by the Al Yunkin Family in his memory.  Al was an Air Force Veteran.

The final Step, for now, was the Akron City Parks Department making and installing the park sign. 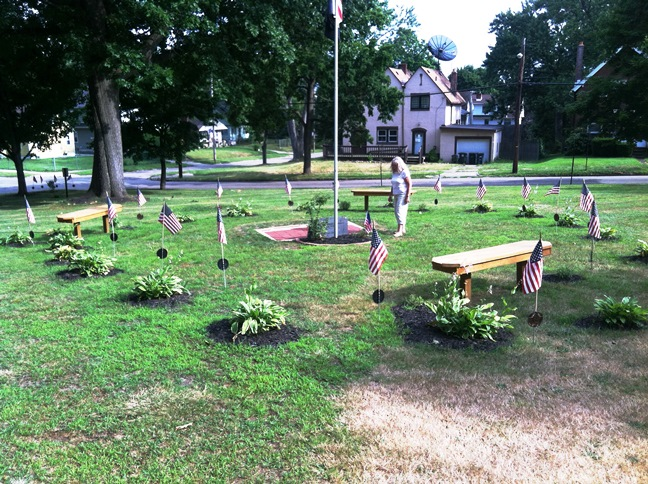 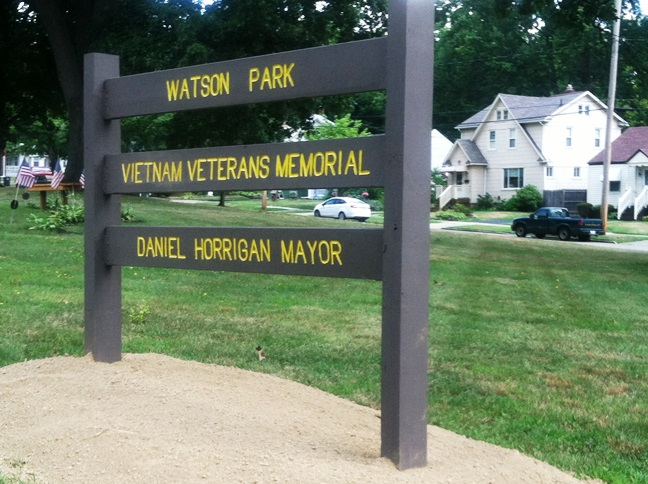 The next step is edging the sidewalks and general cleanup.  We researched the rental cost of an edger and realized since we have taken on the care of the Park,  It would be cheaper just to buy a power edger! 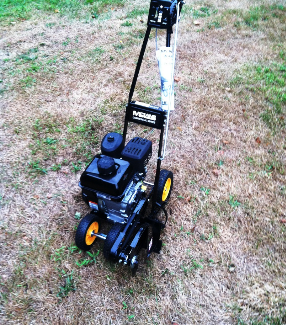 And who better to break it in than Charlie?? 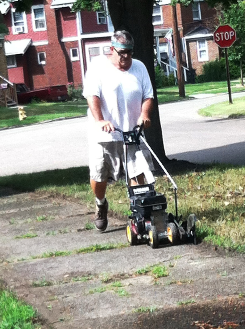 The bricks have been covered for the winter season with tarps to prevent them  from the normal wear and tear of winter.  They will be uncovered when spring comes.  Again, thanks to charlie for taking care of it.

The latest news follows:  The sidewalks have all been edged again, flowers and plants added, and six yards of black mulch have been spread throughout.  It is really looking good there stop by and see!!!

Of course, this will continue as a work in progress, so more to come!

Print | Sitemap
In Service To All
Login